Jennifer smiled again. She’d been forced to take this DNM course (Designed for Nonscience Majors) in oceanography to satisfy a requirement for her art history major, freshman year, second semester. She chose this one because she was from Idaho and learning about the ocean sounded at least like some fun, not like physics or statistics which were her other options. But it wasn’t fun, she was having to learn about stuff like gyres and thermocline and halocline and uh, she looked down at her notes, pycnocline? Ugh! She wasn’t some stupid bimbo like most sorority sisters were made out to be. But science was not her thing. She was just right-brained.

She’d hated this class, but needed to pass. That’s why she started coming to the Friday group study sessions with Brandon, the oceanography grad student. Now she wouldn’t miss a session, and not just because she needed the help, but because she liked Brandon. Liked him a lot actually. He was kind, funny, smart. He could explain things to her in a way she could understand and never talked down to her got annoyed when she didn’t get it. And he was cute!

Most of the other students left early, but she always stayed the full hour, for some one-on-one time with Brandon. Straying from gyres and pycno-whatevers to direct conversation to him, asking about his interests, learning he worked on a crab fishing boat over summer breaks, like those Dangerous Catch guys! That would explain the toned muscles and enticing aura of adventure about him! She kept hoping he’d ask her out on a date. But it wouldn’t be today today because he was quitting early. “Hey Jennifer, if you don’t have any more questions, I’m going to have to head out.”

He looked embarrassed. “Well, I had to take a part-time job on the weekends to help with my share of the rent. Grad school isn’t cheap.”

“Oh, yeah, oh course! Um, good luck,” she stammered. Oh nice, Jennifer! She chided herself.  Maybe she should just ask him out? It was 2018 after all, and this was Seattle. A girl could afford to be more aggressive here, right?

After Brandon left and she was putting her books back in the backpack, she suddenly remembered she had the “event” tomorrow night. Flushing, she gulped as the nerves hit her like they always did when she thought about it. She was in a serious sorority, not a party one. But that didn’t mean Chi Delta Omega girls didn’t get a little naughty sometimes!

That’s when her sisters in liberal Seattle resolved to have her do a sex-positive “pizza dare” this Saturday night. A pizza dare is when the girls order pizza and she would have to open the door and pay the pizza delivery man completely in the nude! While they recorded it on their phones. And his phone, if he let them do it! It was the last part where she convinced them she could wear a masquerade mask to hide her face. She didn’t want that video of her ending up online with her face in it!

Jennifer was shivering. Not just because she was butt-naked, but the tension of the wait was getting to her. They’d ordered the pizza ten minutes ago. When would the knock come? What would he do? Would he be cute? Old?

She looked down at herself. She’d put some pounds on in her freshman year, not the dreaded freshman 15, though, as she jogged and did some Yoga to stay fit. Also, her girlfriends and given her her first bikini wax insisting if she was going to show everything, she was going to do it right and show everything! Yeah, she told herself, you’ll be a welcome sight, Jennifer. You got this!

There was a knock on the door. “Pizza?” a voice said. Her heart beat fast. This was it! She walked haltingly over to the door and reached a shaking hand to the handle. When she hesitated, her sisters gave her hushed encouragement. Taking a deep breath…she opened the door.

And standing there stunned by the sudden appearance of a totally naked girl was a tall young man in a Dominoes Pizza uniform who…looked kind of familiar…OH GOD! It was Brandon!

Her heart leapt and her face blushed deep red, “Uh, um,” she stammered. Did he recognize her, did he know it was her? Rolling her eyes, Allison, one of her sisters, ushered the also blushing Brandon in the door and took the pizza box from him. Laughing, she eventually caught Brandon’s attention which was previously locked on Jennifer’s nude body.

“You must be new. Happy first pizza dare Brandon! Here’s how it works, we give you a bigger tip if you let us take a pic of you with our friend who is exploring her sexual freedom tonight, okay? We can use your phone, you know, for a keepsake!”

“Oh come on, just hand it over. Don’t worry, this isn’t a hazing. She likes it, don’t you sweetie? She wanted to do this!”

“Y…yes,” admitted Jennifer, finally able to speak. And she did, she was scared and nervous, but also getting wet as hell. What a rush! She was living out her fantasy and…it was with Brandon!

“Oh my god, I’m giving him a hard-on!” realized Jennifer. Allison was directing Brandon over to her, “Well go on, put your arm around her! Don’t be shy!”

Jennifer felt a tingle of electricity as Brandon’s muscular arm went around her left shoulder. Then, scarcely believing she was doing this, she took his hand and guided it over her left breast. She heard the characteristic camera shutter click. This made him turn a little and she felt his hard manhood brush against her right butt cheek. He smelled of the ocean. It send a jolt of desire into her. Her hand reached down and stroked his manhood through his pants.

He gasped in her ear. She undid his belt and to the shock of her sorority sisters, she went to her knees, pulled down his pants and revealed his bulge straining to escape his boxer briefs. Looking up into his ocean blue eyes, she tugged down on his boxer briefs, the waistband sliding down, down his hard shaft until six inches later, it finally slipped over the head of his cock and his manhood suddenly sprang up and out revealing a glorious, veiny erection quivering like an eager husky straining against it’s leash!

She licked her lips and stuck her tongue under the glistening tip, then rose up on her knees a little to give it a kiss. Still locking his gaze with hers, she ran both hands down his hard abs and back over his firm ass, then leverage gained, started taking his length in her mouth and down her throat. Out and in, out and in as he moaned in pleasure.

Then she backed him out of her mouth, leaned his cock on her face and still looking up at him, started licking his cum-filled balls. He shuddered and she felt a drop of precum run down her forehead. Knowing he was getting close, she grabbed the base of his cock with both hands and took his first three inches in her mouth. Tilting her head side to side, working her tongue around the tip of his cock, tasting his precum. Tasting the brine of the sea.

He grasped the back of her head, instinctively trying to work her head down further on his cock, and she allowed him. All the way down to his balls, long deep strokes, faster and faster. Until “Oh God!” he screamed, and she quickly sank back down on her knees, face tilted back, ready to accept his load.

And he came. Thick jets of his seed leaving long, foamy splashes on her face like waves on an ocean beach. After the tide had receded, Allison said in a husky voice, “Um, here’s your phone back?” She had recorded everything.

Jennifer felt strong, empowered, not the same kind of nerves he’d had that night before the “event.” The event that had in a very real way changed her life. Brandon taught, Jennifer asked a few questions like always until they were alone and she nonchalantly asked, “Oh yeah how did your job go?”

“Oh,” she said brightly, “Did you enjoy it? Was it satisfying? Something you’d like to do again?”

Evasive. Cute. “What kind of job was it?”

“Oh, you deliver loads then? Big loads? Keep track of them on your phone, maybe?” she was really teasing him now!

Brandon was smart, he sensed something going on now. “Er…yes, I mean I guess. Why do you ask?”

In response, Jennifer reached into her backpack and pulled out an object. It was a a black and gold masquerade mask with some splotches of a dried white substance on it.

“Brandon, I have one more question to ask you!” 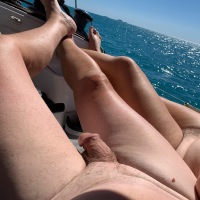